Highlights
Fresno musician Agustín Lira was a striker 50 years ago 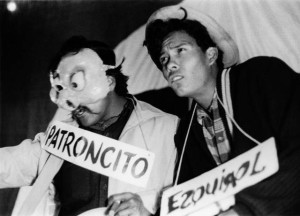 Luis Valdez, left, in the mask, and Agustin Lira, right, portray scab workers while performing “Two Faces of the Boss” on top of a truck along Highway 99 in 1966. Fresno Bee archive
By Andrea Castillo
acastillo@fresnobee.com

It all started Sept. 8, 1965. Filipino farmworkers walked out on Delano grape growers to protest years of poor pay and working conditions.

The strike lasted more than five years and grew to include an international boycott by consumers of non-union grapes. It ended with victory for what had become United Farm Workers – its first contract with the growers.

Fresno musician Agustín Lira was 19 when he joined the strike a few months after it started. Lira was born into a migrant farmworker family and worked alongside his mother as a child laborer. Before high school graduation, he expected to end up back in the fields.

One day, Lira picked up a newspaper and read about a group of farmworkers who had gone on strike and were looking for volunteers. He went on to co-found El Teatro Campesino with fellow United Farm Workers volunteer Luis Valdez during the strike.

Performing on picket lines, at meetings and rallies, the theater company grew to serve as a voice for the Chicano movement. The day before the historic 1966 march from Delano to Sacramento, Chavez asked Lira to write a song. “La Peregrinacion” (“The Pilgrimage”) became the anthem of the UFW movement. Lira debuted his music before more than 10,000 people on the state Capitol steps.

Lira first recounted his memories from the strike with The Bee in February and expanded on them Wednesday. The conversations have been edited for clarity and brevity.

Q: What about the strike appealed to you?

A: The very first thing was that I saw was brown-skinned people. I saw Filipinos and Mexicanos working together. I had seen us working in the fields together, but never working for our rights together, on that level. And the leadership was composed of those people. There was just a real kinship.

A: When I first arrived there was daily picketing going on there early in the morning, 4 or 5 a.m. We usually had a plan. We were following the workers throughout the picking area. We knew where they were going to be the following day. When we did find workers in the fields the whole situation would begin, trying to speak to them and appeal to them to consider working somewhere else. We had rides set up to take them.

We would come across crews who would refuse. There was resistance from some of the workers – they had to make a living. Working in the area they lived was one of the ways to try to make ends meet. This was just survival.

Q: What were some of the challenges you faced?

A: Just fitting into the daily rigamarole was difficult. On the picket lines we had to be very careful about our activities and what we were doing. The police were very negligent about different things.

It was a continual struggle. In the beginning, people would be injured and beaten. Later on, people got killed. Luis Valdez was picked up and slammed around by members of the Teamsters union, who were brought in by the growers to oppose us.

During the early marches, if we didn’t march with religious figures they would have shot us down in the streets. The FBI infiltrated UFW from beginning. (Under the counterintelligence program COINTELPRO, the FBI conducted widespread surveillance and disruption efforts of activist leaders, including Chavez and Martin Luther King Jr.)

Q: How did you and Valdez start El Teatro Campesino?

A: A month after I got there Luis Valdez showed up. We began talking on the picket lines. Luis, since he was a volunteer, he slept in the same room as I did on the floor. Sometimes 10 volunteers would sleep on the floor in sleeping bags. At one point we met at a cafe, talked about doing theater for a long time and recruited people without asking Cesar or Dolores (Huerta). Then we asked them for permission, which they gave.

We started rehearsals in the night after boycotting and picketing all day. We would end rehearsals around 1 a.m., sleep two or three hours and then do it all over again. We presented our material at different events and took our theater group to all those places, even out on the picket lines.

There was room for me and my creativity. We were brash and rash. The humor that we used, I’d never seen it before. Where did you see theatrical plays where the workers triumphed, where their dreams came true?

“
I had been told about evil all my life growing up in the Catholic religion. But going to Delano, I saw evil for the first time.
Agustín Lira of Fresno

We saw the behavior of the opposition to us, like the growers. Sometimes they would bring their dogs and let them loose on us. Sometimes they would bring trucks and throw open the doors while strikers were out to knock people down. Sometimes growers would go out with chemicals and spray people. Police stood by and laughed. Growers would go out and start fights. That’s how we got a lot of our material.

I had been told about evil all my life growing up in the Catholic religion. But going to Delano, I saw evil for the first time.

We took the sentiment out into the community in the form of plays to motivate people and get them to join us. It was part entertainment, education and motivation. A lot of workers didn’t recognize what was happening to them. And we were trying to get the public to understand that farmworkers needed to live better and that the food chain was tied to them.

Q: Looking back on the strike, what does the 50th anniversary mean to you?

A: It was a wonderful training ground for all of us to learn how to organize, how to use the arts and theater, how to experiment. It was that strike, it was that call to come in as a volunteer, to begin with a rogue organization. It was there that I learned my direction and which way I wanted to go. It was because of what I saw there. It was a bona fide struggle. I’ll always be grateful for that.
Andrea Castillo: 559-441-6279, @andreamcastillo

Who: Grape strike and boycott veterans, plus farmworkers from ranches organizing and negotiating UFW contracts