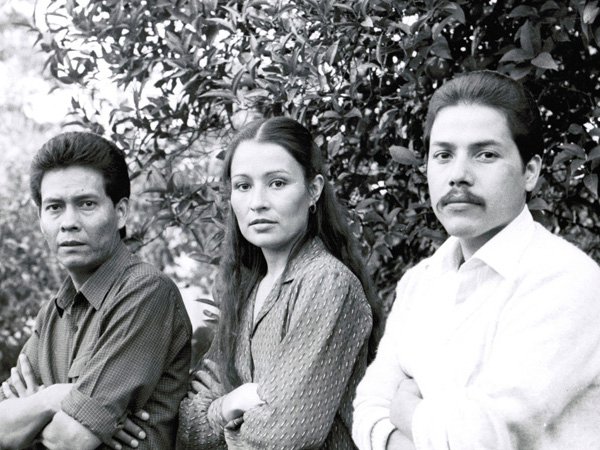 “Fresno’s El Teatro de la Tierra is political theater of the most subtle and effective sort, without rhetoric, without debilitating and alienating anger and without that diminishing humanity which results in two-dimensional placarding.” –John Mahoney, Los Angeles Times

El Teatro de la Tierra (Theater of the Earth), is dedicated to the preservation, creation and advancement of art and culture. The organization provides music instruction, theatrical training, showcases performances by Teatro Inmigrante (Immigrant Theater) and musical group Alma, and operates as a presenter highlighting diverse groups at local venues.

El Teatro de la Tierra was formed in 1971, in East Los Angeles by Agustin Lira (2007 NEA National Heritage Fellow and cofounder of El Teatro Campesino) and a group of artists in response to a call for a week-long celebration of Mexican American culture at the Ashgrove theater club. The group fused poetry, music, dance, the visual arts, and theater to create its own vision of the Chicano urban experience. Known for its hard-hitting poetry dramatizations and dynamic acting style, the company received critical acclaim and performed throughout Southern California and the Los Angeles metropolitan area at schools, colleges, governmental agencies, community organizations, and correctional institutions. In 1972, KCET Channel 28 spotlighted the company in a film by Jesus Trevino titled “Presenting El Teatro de la Tierra.”

In 1974 Lira relocated the group to Fresno and together with Patricia Wells Solórzano, incorporated receiving 501 © (3) status notification shortly after. They set out, with like-minded friends, to teach the arts to underserved groups in the area of Fresno through collaborations with community organizations. Music classes ranging from beginning guitar to advanced Latin percussion have been taught to members of the low-income community over the years. El Teatro de la Tierra produces local talent in both music and theater and takes the advanced students ‘on the road’ to perform at colleges statewide.

Teatro Inmigrante, (Immigrant Theater), composed mostly of women, was formed in 2001 by Lira and Wells in response to the immigrant bashing which had begun in such dead earnest nationwide. Inmigrante dramatizes the life and death issues confronting undocumented immigrants through its original plays, highlighting the contributions and accomplishments of Latino women, demonstrating that immigrant energy builds and nourishes this nation.

Teatro Inmigrante produces a new play each year drawing from the pages of Chicana/o history and modern-day life, such as:

Teatro Inmigrante received the Organizational Way of Peace Award (2007) from the Fresno Center for Nonviolence for “their intrepid work in theater and music of high excellence.”