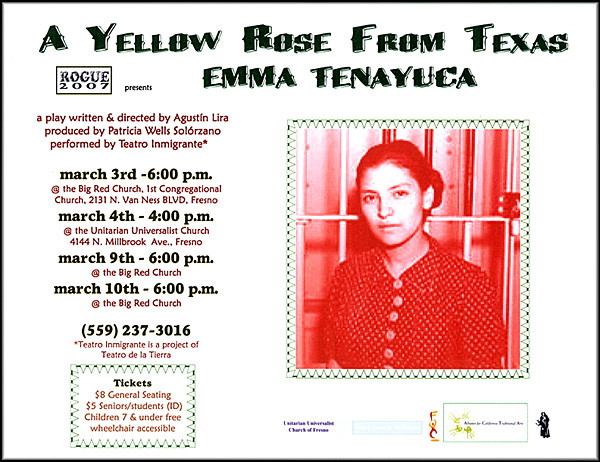 Written and directed by Agustín Lira, the play tells the story of this unique individual who brought national attention to the terrible working conditions and poverty wages suffered by the pecan shellers, most of whom were women and children. Indeed the pay was so low the workers and their families frequently went hungry; tuberculosis was rampant and the infant mortality rate was the highest in the nation.

The play traces the beginning of Tenayucaʼs childhood in the barrios of San Antonio where she was raised by her grandparents, to her high school years when she is singled out by teachers for her scholarship and leadership qualities. Her broad interests in the academic world, together with her grandparentsʼ work in social justice in the community, led her to participate in her first strike against the Finck Cigar company when she was 16. Arrested and mistreated by the police, who protected the rich, Tenayuca vowed to devote her life to fight for the rights of workers.

The play climaxes with the famous walk-out by pecan shellers that would lead to the intervention of the State of Texas District Attorney, upon orders from U.S. President to step in and settle the strike of mostly Mexican women strikers. Tenayucaʼs fearless defense of her community is remembered to this day. As Lira told Juan Esparza of Vida en el Valle bi-lingual newspaper “her legacy is that she challenged an important enterprise, the power structure of San Antonio city government, called for equal pay for equal work during a difficult time of wage differentials – the Depression – and she articulated the integral issue of Mexican American identity.”

Funded in part by the Fresno Arts Council CEP grant, the Alliance for California Traditional Arts LCG program, the Unitarian Universalist Church and the Fresno Center for Non-Violence. Thank you for the private contributions of funds, food and props for the production to our friends, family and supporters.