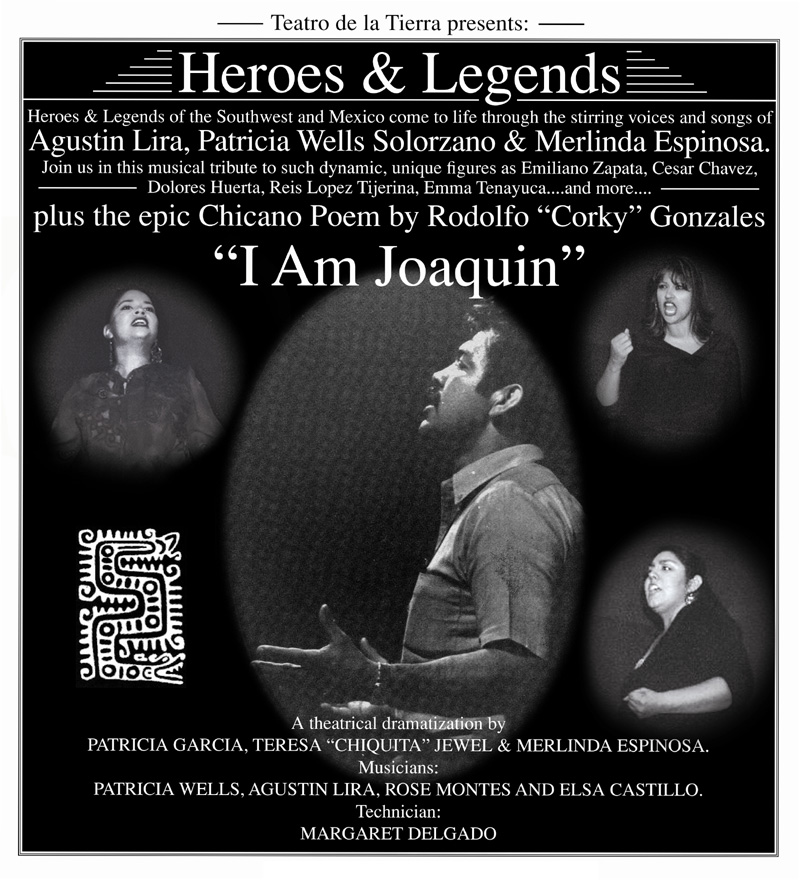 Part I — “Heroes & Legends of the Southwest and Mexico”

“I Am Joaquin” – A Theatrical Dramatization of this epic poem is adapted, directed and scored by Agustín Lira and dramatized by Patricia Garcia, Teresa “Chiquita” Jewel and Merlinda Espinosa. Rodolfo “Corky” Gonzales, the author of the poem, was a famed defender of the Chicano/Latino community. The show features the moving renditions of Garcia, Jewel and Espinosa, as well as the live music of singer/guitarists Lira & Wells who also play hand percussion, sound effects, Rosemary Montes on congas, guitar, hand percussion & conch, Elsa Castillo on congas and hand percussion. Margaret Delgado stage manager/technical assistant/business manager.

This performance is dedicated to the memory of Rodolfo “Corky” Gonzales, who passed away on April 12, 2005. According to Antonio Esquibel, who has compiled the writings of this great leader in the book Message to Aztlan, “Gonzales was one of the most famous leaders of the Chicano Civil Rights Movement. He was a bigger-than-life hero who inspired his followers not only by taking direct political action but also by making eloquent speeches, writing incisive essays and creating the kind of socially engaged poetry and drama that could be communicated easily throughout the barrios of Aztlan. Gonzales and other Chicanos established the Crusade for Justice, a Denver-based civil rights organization, school, and community center in 1966. The school, La Escuela Tlatelolco, lives on today.