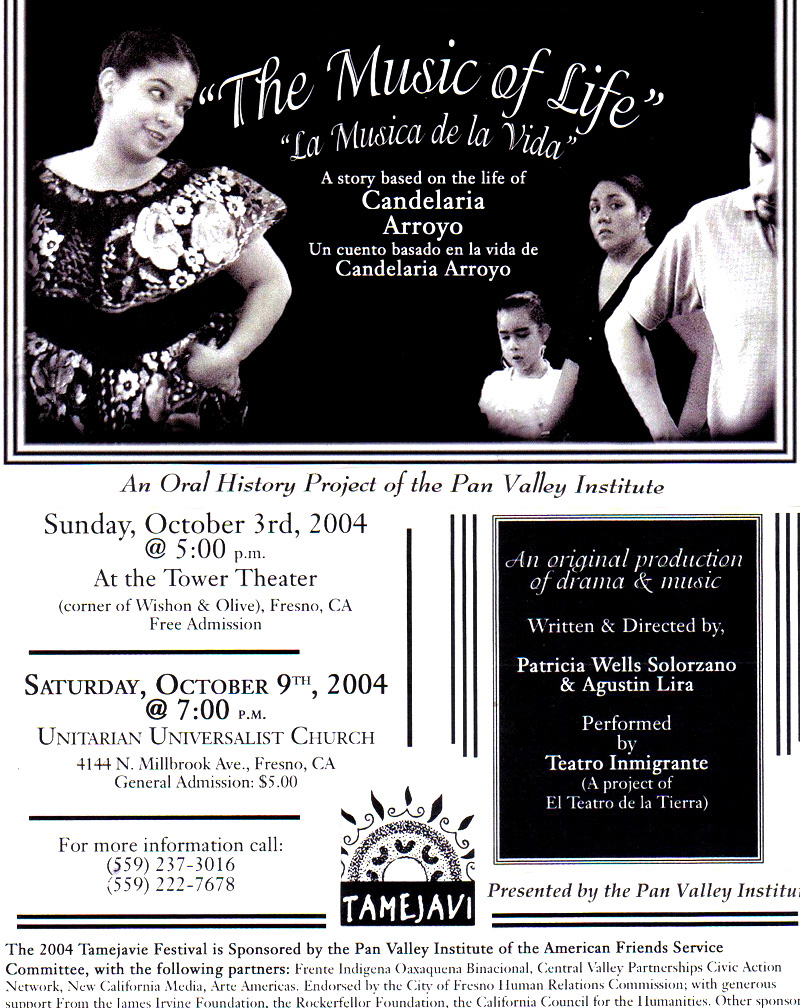 In the Summer of 2004, Myrna Nateras Martinez of the Pan Valley Institute, invited local artists Patricia Wells & Agustín Lira – founders of Teatro Inmigrante – to write, direct and present a theatrical performance based on an oral history about the life of a popular local singer who became a labor organizer.Written and directed by Wells & Lira, the play follows Candelaria Arroyoʼs life: born to Mexican parents in the mountains of Durango, her father was a miner and her mother worked in the home. Candelariaʼs father leaves to the U.S. to look for a better life. He sends for the family when he has saved enough money and they settle in rural Sanger where they begin to work in the fields.

Candelaria learns to speak English very quickly and she notices how the growers use the language barrier to cheapen the daily pay rate for the workers who didnʼt speak a word of English. She becomes an interpreter on the worksite, where she helps fellow farm workers bargain for better pay. Farm workers usually traveled to “the big city” of Fresno on sundays, where the cultural life was very rich for Mexicans who were a tightknit community in the Central Valley. A man named Mr. Tirado held talent competitions at the historic Azteca Theater on Fresnoʼs westside. Candelaria had a natural knack for singing; she and her sister entered a competition and won. She eventually meets El Dueto Moreno, parents of famed singer/guitarist Carmen Cristina Moreno. Arroyo toured cross-country with the dueto, playing live on radio, TV and all kinds of Mexican celebrations.

As an adult, Candelaria begins to work at Zacky Farms, when she sees how the company takes advantage of the fact that many immigrant workers do not understand English. The workers were being exploited with low pay, long hours, no breaks and so on, however this time, there were immigrants from Asia and India working there. She and a union labor organizer set about to process citizenship papers for every single worker in the processing plant. Interpreters are brought in to facilitate the work, and the workers eventually win the freedom to bargain.