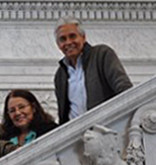 Republished by permission from an article in ACTA. Originally published Sept. 2011.

The two concerts took place at the Coolidge Auditorium of the Library of Congress and the Kennedy Center Millennium Stage. The program was curated by Amy Kitchener, Executive Director of the Alliance for California Traditional Arts and presented by the Library of Congress American Folklife Center and the Kennedy Center for the Performing Arts with additional support from Smithsonian Folkways Recordings.

The American Folklife Center annually presents Homegrown: The Music of America Concert Series in which state folklorists are invited to curate concerts representing the living cultural heritage of the states they serve. The free concert at the Library of Congress serves as an “open recording session” with the resulting audio-video recordings entered as an acquisition into the extensive permanent archival collections of the Library of Congress, which are made available to the public at the American Folklife Center. The evening performance at the Kennedy Center Millenium Stage, which was simultaneously webcast, played to a near full house in the daily free Performing Arts For Everyone program.

Each of the groups who performed have significant prominence in reflecting the expressions of the Mexican American experience.

Agustín Lira is one of the cultural pioneers of the Chicano movement’s musical style. He worked also as an actor, writer, composer, and activist, continuously offering his guitar, voice, and mind to the trials that confronted his community. Today, Lira, his partner Patricia Wells Solórzano, and bassist Ravi Knypstra form the ensemble Alma. Founded in 1979, the goal of Alma was to make evident, through expressive culture, the hidden stories of Chicana/os and Mexicana/os who contributed to our history. After attending university, Wells Solórzano decided to develop her skills as a singer and lead guitarist, which complemented Lira’s musical direction as a singer-songwriter. Knypstra, a much sought after player in Los Angeles rounded out the group, offering experience in styles such as blues, country, rock, and jazz.

In 1992 the group Quetzal surfaced during a particularly contentious time, characterized by the Los Angeles uprising in response to the Rodney King beating, and the Zapatista insurrection in Mexico. Flores and his group were interested in composing music that reflected their community’s experience in Los Angeles. The group developed a distinctive sound when vocalist, dancer and composer Martha González joined forces with Flores. Together they fused every type of music and technology available to them, including folk instruments like the tarima (a small wooden platform which is danced upon), jarana (a small rhythm guitar), and requinto (a melodic guitar) of the jarocho tradition of Southern Veracruz, together with contemporary grooves and feels of rock and jazz.

The ensemble is rounded out with long time member Tylana Enomoto, who provides inspired playing influenced by her participation in everything from classical to hip hop; East LA bassist Juan Perez, who has facilitated Quetzal’s transnational dialogue between Chicana/o artists from California and jarocho musicians and dancers from Southern Veracruz by working with both Quetzal and the jarocho ensemble Son de Madera; and Camilo Moreno, who hails from a lineage of musicians from Pasto, Colombia—his father was a member of the popular salsa group Niche.

ACTA consultant Russell C. Rodríguez, PhD served as the MC providing both context and insights from his direct experience as a Chicano musician and scholar. His interpretative essay was printed in the programs for each concert.

Some upcoming recordings and broadcasts to watch out for:

*The new release by Quetzal by Smithsonian Folkways Recordings, the nonprofit record label of the Smithsonian Institution, coming out in early 2012

* Radio Bilingue, the national public Spanish-language radio network, will broadcast the Library of Congress concert on their network including over 100 affilliates in the US, Mexico, Canada and Puerto Rico on Thursday, September 29, at 12:00pm Pacific Standard Time. The broadcast will be archived on their website.