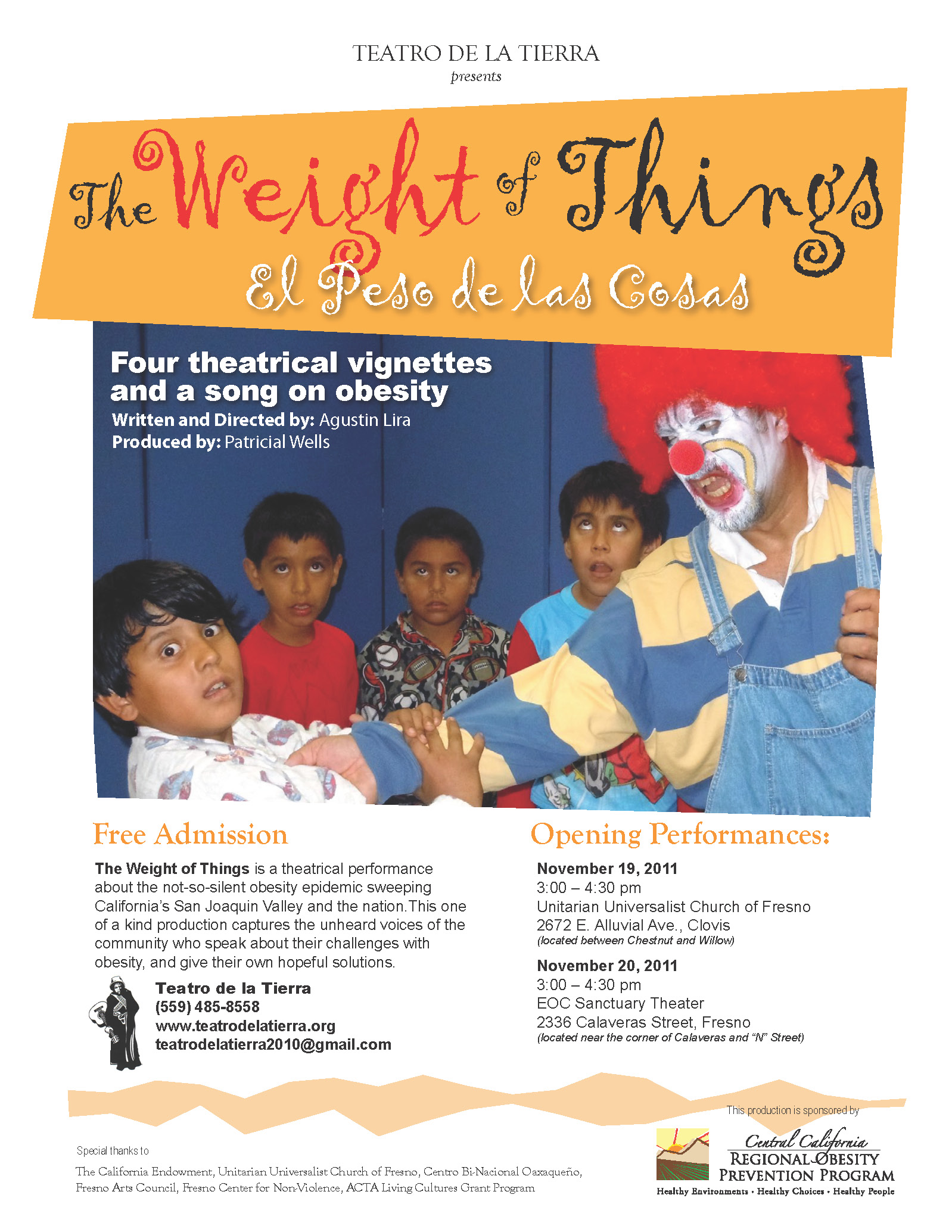 The Weight of Things: Four Theatrical Vignettes and a Song on Obesity

A not so silent obesity epidemic is sweeping the nation costing as much as $147 billion— and an untold number of lives—every year. Two-thirds of American adults are either overweight or obese. Childhood obesity has tripled in a generation. Together they add up to a public health crisis which Genoveva Islas, regional program coordinator of the Central California Regional Obesity Prevention Program (CCROPP), is only too aware of.

To increase awareness about this issue, local writer and director Agustín Lira and producer Patricia Wells Solórzano, are releasing a new theatrical production, called “The Weight of Things: Four Theatrical Vignettes and a Song on Obesity.” Opening performances of the production will be on Nov. 19 from 3:00 – 4:30 p.m. at the Unitarian Universalist Church of Fresno (2672 E. Alluvial Ave., Clovis) and on Nov. 20 from 3:00 – 4:30 p.m. at the EOC Sanctuary Theater (2336 Calaveras Street, Fresno).

“Obesity is a vast and complicated subject,” explained Islas. “One of my jobs is to transmit that information to my community into comprehensible pieces. I’m always looking for different, effective ways to communicate and one of those methods is through the use of theater because of its ability to show the human drama behind the statistics,” she said.

In the San Joaquin Valley, obesity has struck with such ferocity and disdain, bearing down hard on the Hispanic/Mexican population. Because of the necessity to communicate the urgency of this crisis to San Joaquin Valley residents, Islas hit on the idea of using theater to focus on the most important aspects of obesity.

In talks begun roughly a year ago between CCROPP and El Teatro de la Tierra, it was agreed upon that local artist Patricia Wells Solórzano and Agustín Lira (National Heritage Fellow, 2007 and cofounder of Teatro Campesino) would develop a theatrical production about those at the center of the issue: the people who suffer the consequences of neglect, isolation and poverty. This production is not a lecture, nor a nutrition class, it is a presentation of the unheard voices of the community who speak for themselves, tell their own stories, name their own concerns and give their own hopeful solutions.