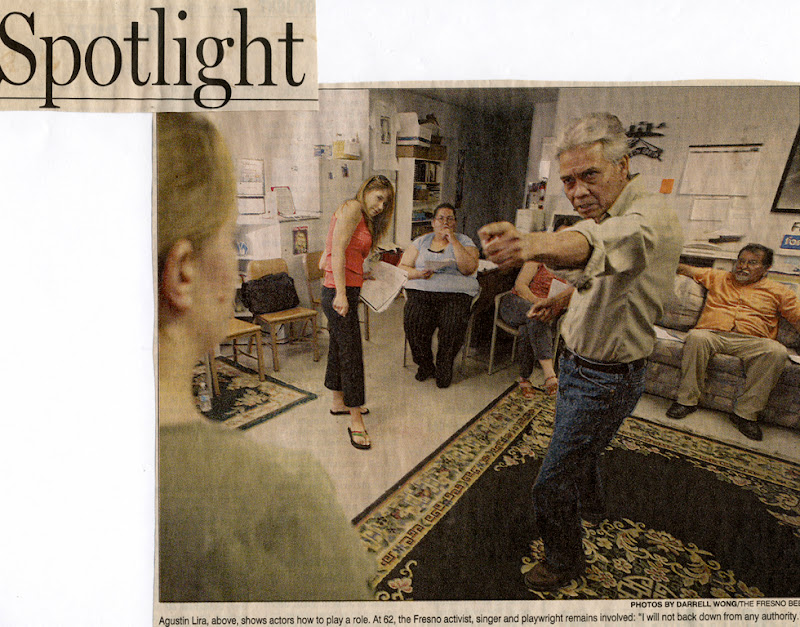 Rebel YELL : Social activist has yet to lose his strong voice.

One of Agustin Lira’s favorite movies is “Das Boot.” It’s a telling choice for a man who has spent much of his life at the epicenter of conflict.

At first it might be hard to find the connection between Lira, 62, and “Das Boot’s” riveting tale of a World War II German submarine crew made to squirm in the cold North Atlantic. This activist for immigrant issues hasn’t waged his battles with guns. His weapons of choice are words. Marching alongside Cesar Chavez in the dusty fields of Delano in the 1960s and 1970s, back when the farmworker-rights movement in the Central Valley was at the cutting edge of history, he turned songs and theater into ammunition for his cause.

But dive deeper into “Das Boot,” and you begin to see the movie’s appeal for Lira. This 1981 film isn’t simply a story of us vs. them. Its momentum depends upon slyly detaching audiences from long-standing positions of strident partisanship. Instead of rooting for one side to win, American audiences end up conflicted at watching the other side lose.

“You end up relating to the enemy,” says Lira, a soft-spoken man whose onstage voice suddenly can bark to the back of the balcony.

In other words, this longtime activist, singer and playwright, who worked with Luis Valdez in the original Teatro Campesino, is harder to characterize than you might think. He can be sharp-tongued and opinionated, yes. (Why should Mexican immigrants have citizenship rights? Because “they’re here anyway,” he says). But he can also be gentle and humorous. Still, he wants his music and theater to prod. Perhaps even to sting. Certainly not just to entertain.

He digs down in deep, mucky issues and relishes dirtying his hands in them. He is the kind of thinker who is always stepping back and seeing whatever he’s looking at — art, politics, social causes, even his own career and ambitions — with a complex, contradictory edge.

Consider his 2007 National Heritage Fellowship award from the National Endowment of the Arts, which he will travel to Washington, D.C. to accept in a Sept. 20 concert and ceremony. (He’s the latest! in a distinguished list of Central Valley artists to be honor! ed, including Khamvong Insixiengmai, a Lao Southeast Asian singer, who was a 1991 fellow; Ulysses “Uly” Goode, a North Fork basketmaker who won in 1999; Richard Hagopian, an Armenian oud player from Visalia who won in 1989; and Carmencristina Moreno, a Latino singer who was a 2003 fellow.) On one hand, Lira is clearly pleased at the recognition, which includes a $20,000 award, for his “powerful singing and socially relevant lyrics” that he continues today with the musical group Alma.

Yet he’s quick to add a wry comment that at least this time he’ll be able to fly to the nation’s capital without worrying about getting yanked off the plane for security reasons like he has in the past — a byproduct, he says, of his farmworker activism and his subsequent scrutiny by the FBI. He’s assuming that a government that has treated him brusquely for his social activism will be nicer when it’s giving him an award.

A little feisty, is he? You bet.

In his song “Pastures of Plenty,” an adaptation of a Woody Guthrie tune — one of his heroes — Lira sings, “We will unionize, and we’ll fight till we win.”

Does he consider himself a fighter? He thinks about the question, then says no. A half hour later in the same interview, however, he declares: “I will not back down from any authority.”

These two halves of the whole help sum up Lira.

Whether in the protest songs he recorded for the farmworker-rights movement — some of which are now collected on official Smithsonian recordings — or the short actos, or scenes, that he still performs as part of his Teatro Inmigrante company, he makes his views abundantly clear on what he considers to be the burning issues of the day: citizenship rights for immigrants ( “Mexican hands have helped build this country,” he says), racism and prejudice, the mainstream media’s message of conformity, poorly funded arts and music programs in schools, the wall being built on the Mexican border. And then there’s the Iraq war, which makes him seethe.

And yet his intense approach makes him a stalwart opponent, swift and unobtrusive, like a submarine. He knows that to disarm someone is just another way of neutralizing an adversary. Many years ago, when he first starting using theater as a persuasive political tool, he discovered that just because a performance is issue-oriented doesn’t mean it can be stuffy. Lose the audience, and you lose the battle. He quickly learned to use the power of satire. His plays often have broadly drawn characters, both Mexican and white, whose antics and mannerisms can produce guffaws from audiences. Even while excelling at Selma High School in the 1960s in arts and sports, he found that as a successful Latino, he had to learn to defend himself. That’s when he discovered the power of humor.

“It showed me that I could make my enemies laugh,” he says.

On a Thursday evening, tucked into the small and cluttered office of the Fresno Center for Nonviolence, Lira is rehearsing a master class from his Teatro Inmi! grante company. It’s a small, sturdy group of five. Lira is not in the business of training professional actors. He has little interest in sending pitch-perfect performers to the bright lights of Broadway. For him, theater is a teaching tool — a way to educate not only the audience but the artists.

With him is his longtime partner, Patricia Wells Solórzano, who has lived with Lira since 1975 and shares his artistic endeavors. (Lira says that he regrets that Wells Solórzano, who will accompany him to Washington, couldn’t have received the national fellowship honor alongside him.) Tonight the company is reading through old actos, or scenes, from the young Lira’s time in the fields with Chavez. The goal is to update the skits to the present day.

This acto, titled “Honest Sancho’s Used Mexican Lot,” is set in a surreal “store” in which various worker models are available for sale as if they were cars. A white woman customer walks in and introduces her! self to the owner as Miss Gem-en-ez (rather than the expected ! Spanish pronunciation “Jimenez.”) She tells the salesperson that she is “a secretary from Gov. Reagan’s office” looking for a white- acting Mexican for the governor’s administration.

“We’d better make that Schwarzenegger,” says a smiling Lira, watching from a chair. There’s no doubt that he’s the director here, He dominates the rehearsal, even though he’s feeling a little poorly and is on cold medication. A short word or phrase from him — a pointed glance, even — and the flow of the evening bends to his will.

Lira’s style of theater is not seen often on today’s commercial stage. Some would call it political theater or social-protest theater. Lira doesn’t. He simply calls it Chicano theater.

Whatever it’s named, it is a theater of ideas. The art of persuasion. The first actos were designed to be highly portable and to appeal to farmworkers with no background in theater. The style of acting isn’t naturalistic. The audience isn’t necessarily supposed to “believe” that they’re seeing real characters on stage. Instead, it’s the ideas that burn brightly.

This approach might seem decidedly foreign for Western audiences trained in modern theater. But actually, Lira says, there’s a long history of message-oriented theater from its roots in Aztec culture to the circo tradition of circus-type theater traveling throughout Mexico.

“What we’re doing is being done in different communities all over the world by different groups and races,” he says.

Over the years, the community members participating in Lira’s productions come and go. But Lira doesn’t mind working with beginners. In fact, he relishes it.

“One of the very challenging things he does is he’s usually working with people who may not have very much acting experience,” says Amy Kitchener, executive director of the Alliance for California Traditional Arts. “I find that very authentic and moving, that he has the ability to help give people a voice.”

Wells Solórzano, who helps run Teatro Inmigrante with a combination of small grants and paid gigs from Alma, is particularly pleased when the “regular workers” who act with the company gain social and political awareness.

“To me, what is positive is that they start to defend the immigrant community, she says. “They start to defend people who need defending, who are voiceless. In society, we’re taught to take care of your own. Get your house, get your car. Yes, do that, but what about the rest of the world?”

You could say that Lira made his mark on history early. At age 19, he was rubbing elbows with Cesar Chavez, Luis Valdez and other giants of the farmworker-rights movement. Rather than trying to parlay that name recognition into material success — or build an organization bigger than himself — he has been content to remain small-scale.

“He’s someone who lives very humbly and doesn’t seek a lot of recognition for his work,” Kitchener says. “He’s an artist first and foremost. He survives on very little money to continue to be able to do this work.”

Lira and Wells Solórzano have lived in the same modest house in a challenging downtown neighborhood since 1975. They’ve prided themselves on remaining at a grass-roots level close to the community.

They don’t shy away from speaking out. Whether it’s a well-publicized controversy in 2002 involving the role of Arte Américas in the community, which included protesting in front of the building, to warning children in schools about the dangers of pesticides, they don’t keep quiet.

Lira and Wells Solórzano aren’t martyrs. They long to move to a safer neighborhood once a year, she says. They’d love to take a nice vacation. But they just never get around to it.

“In order for us to have grown into a bigger organization, one of us would have had to turn into a real politician,” Wells Solórzano says. “You know, put on the suit and say, ‘Give us money! Give us money!’ To open up a center, you give up your artistic license, you give up your energy, to go after building the building. ”

But just because he and Wells Solórzano don’t work in a shiny headquarters doesn’t mean they lack influence, they say. In a recent radio show on Radio Bilingue, the pair received calls from farmworkers all over the country.

“We are connected to the rest of the world,” Lira says. “You’d be surprised, the little pressure that we put here in our communities is also heard out there. We have affected the political structure of this country and we intend to keep putting pressure on it.”

It all comes down to that cycle of conflict. The idea of knowing your opponent.

The current political environment, in which immigrant farmworkers are scapegoated for doing jobs that Lira says U.S. citizens won’t perform, is contributing to that sense of conflict. As someone who worked in the fields, he bristles at the way people write off such labor. By harassing immigrants, separating families and traumatizing children, the stage is being set for even greater confl! ict. That’s why he continues to choose the front lines. Even if it’s the front lines of music and theater. After all, real generals refer to geographical divisions of wars as “theaters.”

“You create individuals like me who are not going to stop fighting for the rest of their lives to change things,” he says. “You either totally break individuals, or they become rebels. You’re looking at one right here.”

The reporter can be reached at dmunro@fresnobee.com or (559) 441-6373. Read his blog at fresnobeehive.com/donald.