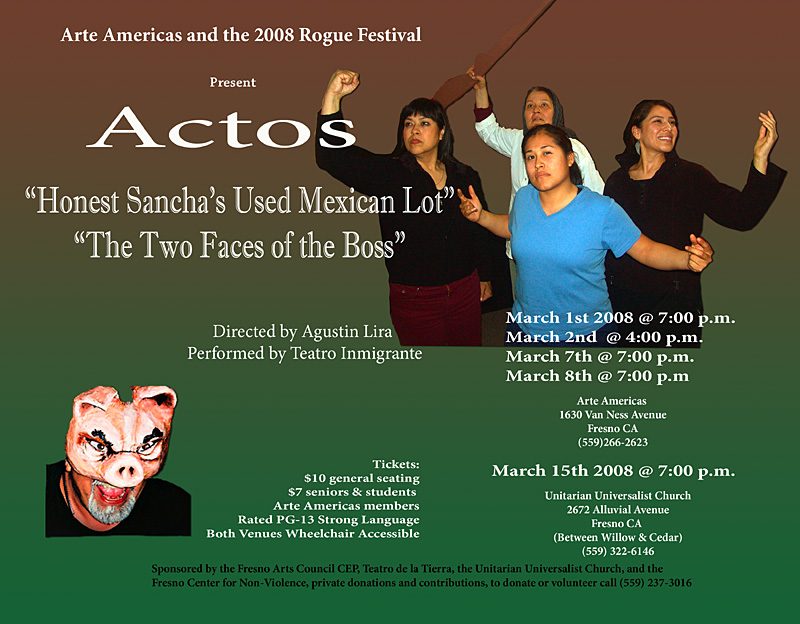 Originally put together by Agustín Lira, Luis Valdez and Felipe Cantu, many of the scenes from these two pieces were improvised on the spot during rehearsals in the first years of El Teatro Campesino. More than 40 years later the social injustices prevail and Lira found it his duty to update the pieces, using humor, music and drama, for audiences to laugh, analyze and enjoy. The stage is the perfect place to voice what is not said out loud and to laugh at what is taboo!

The show opens with songs by Lira, Wells and Espinosa and into:

Honest Sanchaʼs Used Mexican Lot – re-written and updated by Lira, is a statement on the status of women in our community. Rosemary Montes plays Honest Sancha, more effective and slimey than a used car salesman, she is eager to sell her models to the governorʼs secretary Miss Jim-Enez played by Zaidee Stavely, who sees nothing wrong with buying a token for the governorʼs photo opts and events.

Marta Cavazos plays the hilarious Novela Superstar, a legend in her own mind, her portrayal is a humorous yet scathing critique of what the Latin American media puts on the airwaves during primetime and to add to the misery, Aida Gonzalez plays the Priest in the closet, ready to burst onto the scene and save the day! Christina Armendariz plays the farm worker woman who must struggle to make ends meet; Rosalva de la Cruz is Homegirl, a product of the barrio; Patricia Wells is a commanding officer in the Mexican Revolution of 1910; Merlinda Espinosa plays the heart-wrenching foot soldier in Iraq, whose family back home lives below the poverty level; and Aurora Garcia goes haywire as the modern educated Hispanic…will it never end?!

Funded in part by the Fresno Arts Council, private contributions and donations, cosponsored by Arte Americas, the Unitarian Universalist Church and the Fresno Center for Non-Violence.