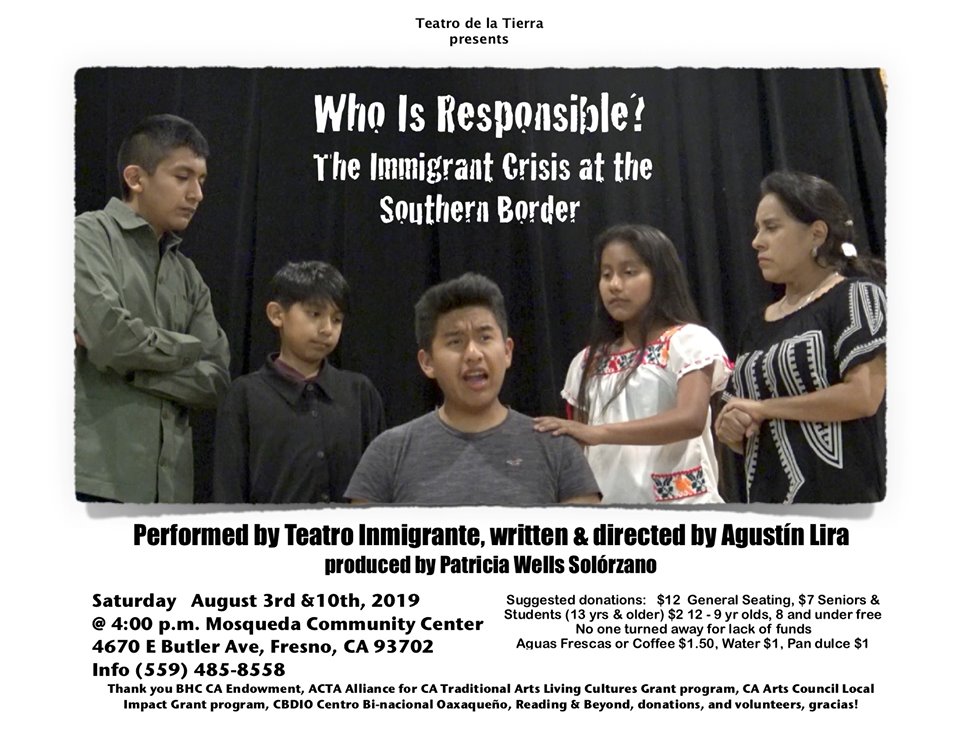 One of the songs that we will be performing for our up-coming play “Who is Responsible? The Immigrant Crisis at the Southern Border” written and directed by Agustín Lira and produced by Patricia Wells Solorzano

Here is a Youtube link to one of the featured songs:
Ali Primera – Sombrero azul
El Sombrero Azul/The Blue Hat by Ali Primera
Recorded ‘live’ on April 1983 in Managua, Nicaragua before thousands of Salvadorans and Nicaraguans. Singer/songwriter Ali Primera was born in Venezuela but he wrote about the tenacity of the Salvadoran people in Sombrero Azul.  In the early 1980’s extreme right-wing soldier Roberto D’Aubisson became one of Latin America’s bloodiest dictators, his regime killed hundreds of thousands of Salvadorans, all  supported by the US, by our tax dollars.  This led to the exodus of over 350,000 Salvadoran people as the dictatorship murdered anyone considered an enemy of the state – men, women, children, students, the elderly. Thousands fled to neighboring countries such as Nicaragua. Agustin Lira, Patricia Wells, and musicians from Generaciones will perform the song.The chorus encourages the Salvadorans to have courage and keep going, even at a slow pace, because even the smallest bird in the sky pauses in mid-air before regaining their flight.
https://youtu.be/ef8sXZ94Ef8
The new work Separated takes a closer look at the origins, the history of why thousands of poor Hondurans, Guatemalans, and Salvadorans are now making their way to the US border. Through music, drama, and satire, stories are told of countries whose populations were decimated, from the arrival of the Spaniards to the present-day right-wing dictators. The project is free of charge, it offers training in teatro/theater arts, it is informative, educational and entertaining. The play debuts in Spring of 2019. We are still accepting beginners through experienced actors for crowd scenes, character roles, and so on. Open to the community, participants must be old enough to read the script and memorize lines for the project, for more information call (559) 485-8558 . The group meets at the Mosqueda Community Center 4670 E. Butler Ave., Fresno CA 93702 every Friday at 6:00 p.m., except December 28, 2019. Rehearsals resume on  Friday January 4th, 2018.

Review: Who is responsible? The immigrant crisis at the southern border.
A play written and directed by Agustin Lira and produced by Patrica Wells
Solorzano

There is anger-plenty of it- in Teatro Inmigrante’s new production ‘ Who is
responsible? The immigrant crisis at the southern border.’ But don’t expect
writer/director Agustin Lira nor producer Patricia Wells to apologize. “Our
objective was to get the information out in a way that the audience could get it, through satire and comedy,” said Lira, a noted singer/song writer, cofounder of Teatro Campesino in the 1960s. “We know that it’s a helluva subject and difficult for people to take. If it shows anger, it’s because it’s there. If it comes out strong, then good.” Wells doesn’t back down either. “It’s an introduction to the historic reasons on how the US has impoverished Central America time after time,” said Wells, who performs several songs, as does Lira, during the 1-hour, 20-minute play. “It gives a basic understanding of what happened in the past.” The production -which will have its second and final presentation at 4:00 p.m. Saturday (Aug. 10) at the Sal Mosqueda Center, 4670 E. Butler Ave.- is broken into four scenes: Vietnam, Guatemala, Central, America/Paris, and ‘The Dead Begin to Rise.’

“There is a connection on how specific events and actions from the past have created the “so-called immigrant crisis,” said Lira. “Since the 19 th century, the US has involved itself in the affairs of Latin America through interventions, the removing of popular and democratic leaders, installing dictators, economic warfare, corporate plundering, the sapping of resources (thus) creating poverty, instability and violence,” said Lira at the end of the Aug. 3 presentation attended by about 70 people. Such actions, he added, undermine democracy and stability.
Among the revelations in the play:

“Studying it hurt. It was painful and very emotional for me to get to work,” said Lira. “Different times of history are shocking.” Wells recalls listening to a radio interview in which a woman described walking up a to a farm on a hillside and seeing that military squads had massacred the animals. “The man who owned the farm was beheaded,” said Wells. “I had to pull over to hear the words. How could this be?” The farmer’s body had to be put back together from various body parts. “I can’t wrap my head around how they could do this,” said Wells. Lira who spent more than a year researching for the play along with Wells, throws out some numbers for thought.
*250 million people worldwide are immigrants.
*$304 billion dollars are contributed yearly by immigrants in the US
*737 US military bases in more than 130 countries. “What the hell do you need so many bases for? To keep people away from the US?” asks Lira.
*The US provides military aid to more than 73 percent of the world’s dictators. He calls for the immediate reunification of children, investments that will lead to economic development and jobs in countries “the US has harmed;” and, closure of all for-profit prisons holding immigrant families.

The goal of the play is to provoke thought among the audience: Mission
accomplished. Although the stage was badly lit, and the backdrop is the same throughout, you must realize it’s the audio message that is important as veteran performers and first-time actors set the base for what has eventually led to thousands and thousands of Central Americans to flee their homeland in search of asylum-and a better life- in the United States. You experience the killings, the beatings, the fear… although you physically can’t see them. There’s a lot of years and countries to cover in a compressed play that had no breaks except for song performances. In the end you don’t feel like you’ve missed much. As Patricia Wells notes, the play relies on veterans and newcomers to the Teatro scene. No problem.

There is no weak link here, as children and adults commit to their lines and deliver effectively. Nayamin Martinez and Wells carry the brunt of the acting, and stand out by weaving comedy with drama. Agustin Lira, Merlinda Espinosa and Wells are veteran musicians, whose music and voice add a perfect interlude to the play. The first-time performance on Aug. 3 did not exactly go like clockwork. There were brief stretches of nothing as crew and cast tried to hurry from one scene to the next, or pick up a guitar for a musical number. However, those were minor inconveniences in which the body of work conveyed the horror of how US-led backing of dictatorships/death squads decimated innocent civilians. At our southern border today, we are feeling those repercussions